Another storm is on the way.

High Noon in the High Desert

When we visited Bodie, it was in the middle of the day; it was hot; there was no shade; we were thirsty.  The high desert is a dry, and to many, a barren place.  I wouldn’t say that – instead, I would say it is a spare land with a spare beauty.  It isn’t lush and verdant, but it is aromatic and clean – the light is clean, the air is clean, and it shimmers and dances with subtleties.  You just have to look.

A Walk on the Wild Side

California is a land of contradiction.  Los Angeles sprawls 50 miles south of where I live, and yet there are wetlands nearby that serve as rest stops for migratory birds.  Locally, Ormond Beach, which is between the Seabee base in Port Hueneme, and the Navy base at Point Mugu.  Currently, areas of the beach are closed off for nesting birds whose only nest is a shallow indentation in the sand, with eggs speckled to match.

Today, I met up with a number of people for a hike sponsored by the local Nature Conservancy, whose essential philosophy is to preserve wild places by buying land, and keeping people out.  They have bought up and have had land donated for the Ormond Beach Wetlands Restoration Project.  They also have other sites here in Ventura County, such as in the Santa Clara River, which is one of the last – if not the last – river in Southern California that has not been modified between its source and release into the Pacific Ocean.

Coastal fog and overcast are normal for the California coast in May and June.  It can be wet and drizzly and grey, while a few miles inland sunshine reigns.  This fog is essential to many California environments, and while not fun to be in at times, it is really stunning in its own right.  We live inland, so the sun is usually visible, but today, it has spread to our own valley.  I left a slightly sunny inland valley to arrive to a drizzly, drippy beach.  My glasses and camera lens had rain drops on them (I hope the camera will be okay – seems to be), and soon my clothes and hair were wet.  Our starting point was a local recycling plant, at the end of a road, and we had views of the Halaco property, which is part of Superfund clean-up efforts . . . there are power plants here, visible across fields ready to plant.  It’s a rather dreary place in the gloom.

Our guides were knowledgeable about the area.  While very flat, the plants and such could be a bit of a challenge to trudge through.  We saw various birds, such as great blue herons, great white egrets, horned larks, terns, and snowy plovers,  Flowers such as coastal lupine, beach morning-glory, dune primrose, and non-native species were also in bloom.  We found animal toilets, where this animal and that pooped, leaving behind interesting scat filled with remains of pelagic crabs, feathers, and bones.  Animal trails showed paw prints of coyotes, raccoons, herons, and other small birds. 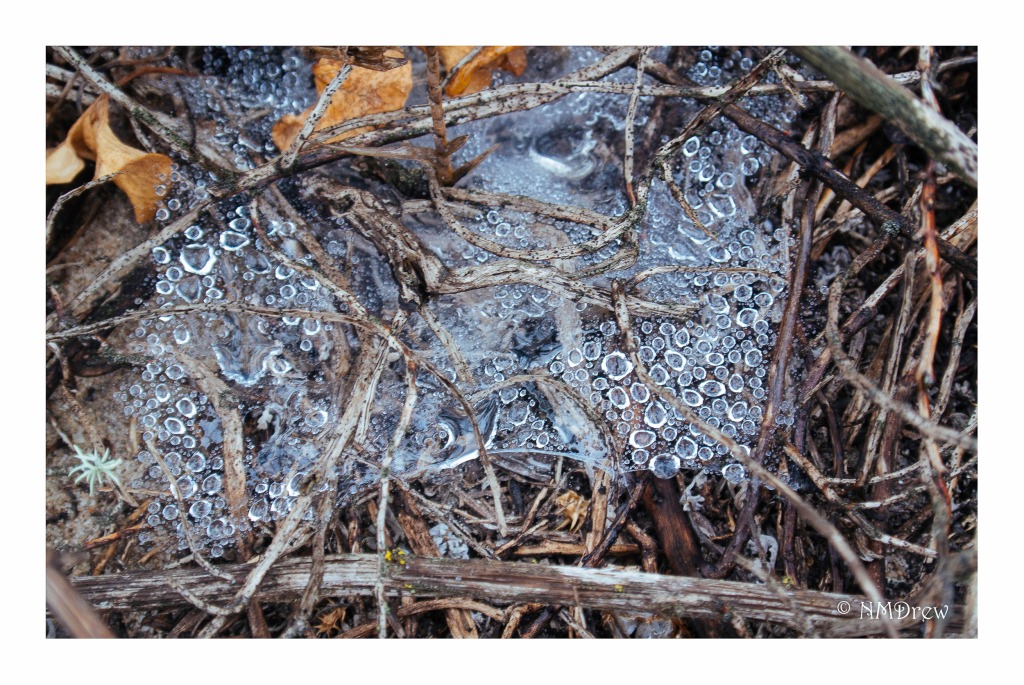 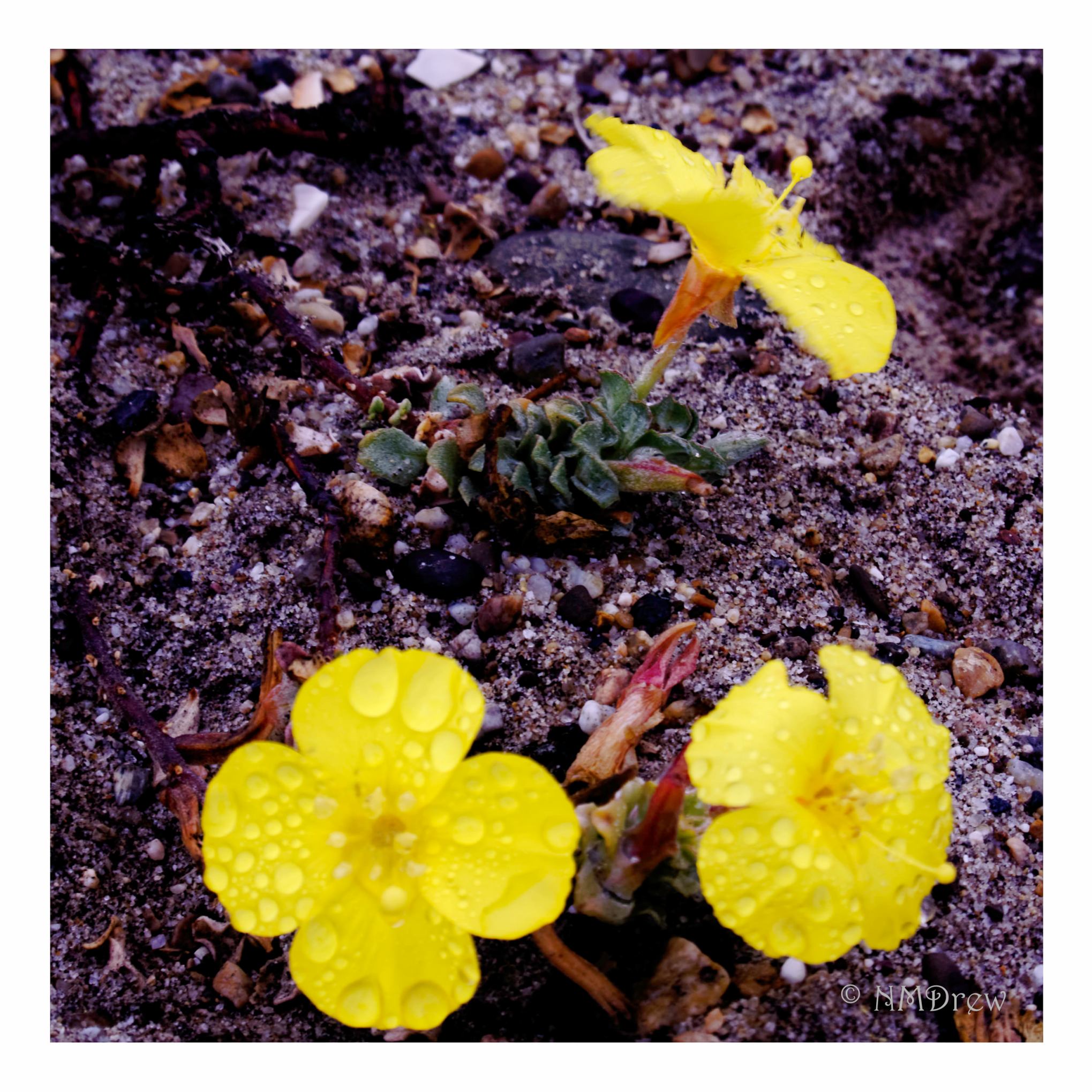 In a world increasingly damaged, the beauty and delicacy of the natural environment is accordingly threatened.  Places such as Ormond Beach are a refuge for not only birds and animals, but for humans as well.  I enjoyed this hike, and came home like a little kid, covered in mud and muck, soaking wet, and completely refreshed by a beautiful world and fun companions.

I always enjoy seeing the sandstone boulders and rocks in the Santa Monica mountains.  How do they get the way they are?  Who or what positioned them?  These look as if they were cast down the hillside by some giant hand . . . These are yellow and red and make a wonderful background for the foliage and weeds of the chaparral.

Foxtails are the seeds of a local wild grass.  They are sharp and pointed, and manage to disperse themselves on the winds or by transportation.  They can work their way into your clothes without your knowing it, are uncomfortable against your skin, and seem to work their way into everything.  If you have a dog, keep it out of the foxtails – they have been known to bore into skin and cause infections.  Not pleasant to be around, but they are really lovely backlit, with their slender stalks and foxtailish shape.

Oh, how much easier it would have been to get the view by road!  Instead, a steady uphill slog of about a mile, with twists and turns and changing views.  The pool of water in the distance is a reservoir, and it looks pretty good from here.  Others in the area could be dried out in four years, and then what will we do for water?  Even now, with rain in the forecast, California is still suffering from the effects of a long drought and poor water regulation.  And climate change. This morning we went on a rather strenuous hike – up and down hills to get to an inland section of the Santa Monica Mountains.  I am not a fast hiker – rather plodding actually – because of a long history and experience with falls and broken bones.  Every step is conscientiously placed, especially where there is scree and loose rocks.  The flowers along the way provided excuses to pause . . .